Hit enter to search or ESC to close

The Beginnings – or how the Philharmonic Society Orchestra came into being.

Notes from a talk given by Eleanor Isbister on the occasion of the Orchestra’s 40th Anniversary Dinner. 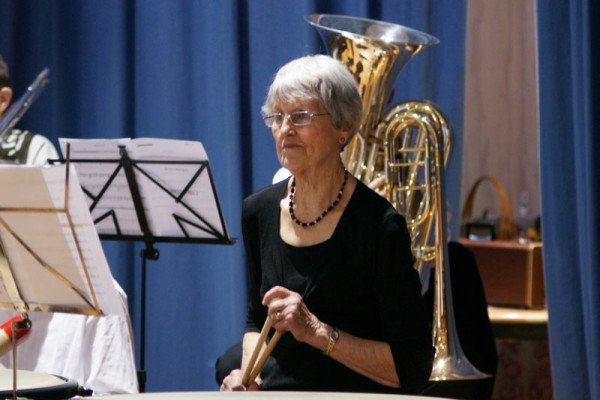 Both Joe and I were products of very musical families.

My parents knew Joe’s family before I knew him, through High School Reunion meetings. My brother Mervyn knew Joe before I did.

At one stage the 2 of them were both organist/choir masters at 2 almost adjacent churches in Onehunga and they combined for one service a month, alternating who was to be the organist and who was to conduct the double choir.

My family all sang in a big church choir – my mother was a soloist and I was roped in to play her piano accompaniments from quite an early age. Joe and his 2 sisters all had their letters in piano performance.

I actually met Joe when we were at Teachers’ Training College and we were both involved in a Musical Operetta by Edward German at the end of that year.

He was working back-stage, and I was the pianist for that production. Some of our spare time in those days seemed to be spent in milk bars (the old equivalent of present Cafes) where we indulged in the delights of tea and toast for the princely sum of 1 shilling and tuppence. If we were feeling flush we had tea and double toast. It was yum toast – cut into fingers; crisp, hot, and dripping with butter!

Some years later when we had been married and had 5 children we started a different time of our lives in the new suburb of Massey. I was teaching full time and being a housewife (in the rest of my time!)

Joe spent his extra time helping the area to grow in respect of the Tennis club, local Church, chairing the Committees and Boards of Primary and Secondary schools and he also began and supervised the Saturday morning music school.

He was doing some choral conducting and the need for an accompaniment as something more than piano became obvious. He had many contacts with musicians and one day the seed of an instrumental group began to grow. He started with a small number of players in our lounge, and as a piano was not usually required, I…………..made the supper!

The instrumentalists grew (in number), moved away from the house and became the Henderson Night- School class and then the Henderson Chamber Orchestra Incorporated.
A percussionist was needed so – what else does one do?? I began having lessons with the timpanist of the then Symphonia Orchestra. I explained how I had to be able to do a bit of everything from the one place, so he showed me how to sit with the snare-drum in front of me – and the bass drum, with a glockenspiel mounted on top – the 2 timpani (hand-tuned), were at my left and a cymbal on a stand was nearby.

When musicians other than ‘Westies’ joined the group, (mind you we didn’t call them that in those days!) we shifted into town to new rehearsal rooms and a new name was required, one which wouldn’t tie us to a specific locality. After some deliberation we became the Philharmonic Society Inc. This could be the umbrella (if you like) for an orchestra or a choir or whatever. (The word Philharmonic just means “music-loving.”)

Our years of playing as a pit orchestra for Musical Shows, as well as performing our own concerts, changed our lives. We were exceedingly busy with Joe training the chorus and the soloists (who for some weird reason often were not able to read music). And, once the children were old enough to be left to their own devices, I went along too to play the piano for these rehearsals.
And of course the children began playing in the orchestra one by one as they could. They had all learned some piano with me – often by remote control from the kitchen – and then moved on to: singing, cello, violin, clarinet and double bass (that’s in order of age.)

For one show only, out of the 32 that we did – the whole 7 of our family were involved – with one singing in the chorus on stage and 6 in the orchestra.
Each show took about 3 months’ work to get to production and then of course it was “all on ” – all of us out every night for at least 2 weeks ; matinees on Saturdays – and the show had to go on whether you had the flu or not. And the whole family had to go to work and school every morning as usual. What sort of parents would treat their children like that???? I really don’t think in the end they suffered as a result.

The Orchestra’s archive folders will give you some idea of what we and the orchestra achieved over those years.

In conclusion I would just like to add that I am so thrilled with the way music is very much on-going through our children, the grandchildren (who are not children any more) and even the great-grands.

I would like to say a huge thank you to Joanne and Robyn for being such a wonderful team, and Joe would be absolutely amazed and delighted to see how the orchestra has progressed and developed – under their guidance – in the 6 years since he left us so suddenly.